As Tom Huddlestone’s recent goal was decided by the dubious goal committee to be an OG, and thus condemning him to another Christmas with a high maintenance Afro, it got us thinking about the best hair we have seen on display in World Cups and major championships over the years… (And by best, we generally mean worst) 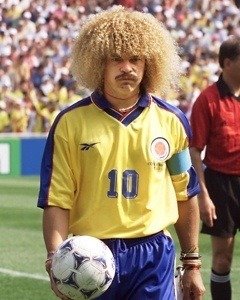 Although mostly remembered for his unfeasibly large blonde Afro, “the kid” was a gifted midfield schemer in his own right – known for his flamboyant playing style, numerous assists, and spectacular long range strikes.

He was twice named South American player of the year, and played a huge role during the golden era of Colombian football during the 1990s, as they qualified for 3 successive World Cups. In 2004, he was included in the FIFA 100, a list of “greatest living footballers” chosen by Pelé to celebrate the 100th anniversary of FIFA.